TOKYO – Canon Corporation (TOKYO: 6502) today announced it has been appointed an Official Sponsor of the Rugby World Cup 2015, renewing the company’s support for the biggest tournament in rugby for the third consecutive time.

Canon’s association spans the breadth of its business domains including social infrastructure, air conditioning, multi-functional printers, digital products and medical imaging devices. In addition, Canon will support the tournament by providing its products to support the running of the event.

Canon has a long heritage in rugby.  As well as sponsoring Rugby World Cup in 2007 and 2011, last year Canon has become the the Official Sponsor of the Japanese Men’s team and will also support their participation in Rugby World Cup 2015. A further example of Canon’s dedication to the game is with its own team, “BRAVE LUPUS”, which competes in Japan’s Rugby Top League.  Many members of the team have represented the nation as part of Japan’s Rugby World Cup team over the years.

“Canon is delighted to be continuing its successful partnership with the Rugby World Cup,” said Noriaki Hashimoto, Corporate Vice President, Corporate Representative – EMEA, Canon Corporation. “The tournament is one of the world’s greatest sporting events and we’re looking forward to playing our part in bringing the power and the passion of the games to a bigger audience than ever before.”

Rugby World Cup Limited Head of Commercial, Broadcast and Marketing Murray Barnett added: “Canon is a world leader and innovator in pioneering high technology and with the expanded reach of Rugby World Cup, we are working to together to reach people wherever and whenever they are watching, talking about or playing rugby.”

In the build up to and during the tournament, Canon will initiate a range of activities to enhance its association and engage spectators with the event. Part of Canon’s activity will include perimeter boards at each match of the tournament as part of a larger advertising programme. Activity will be focused on regions where rugby is most popular including Europe, Japan, Oceania and Africa. 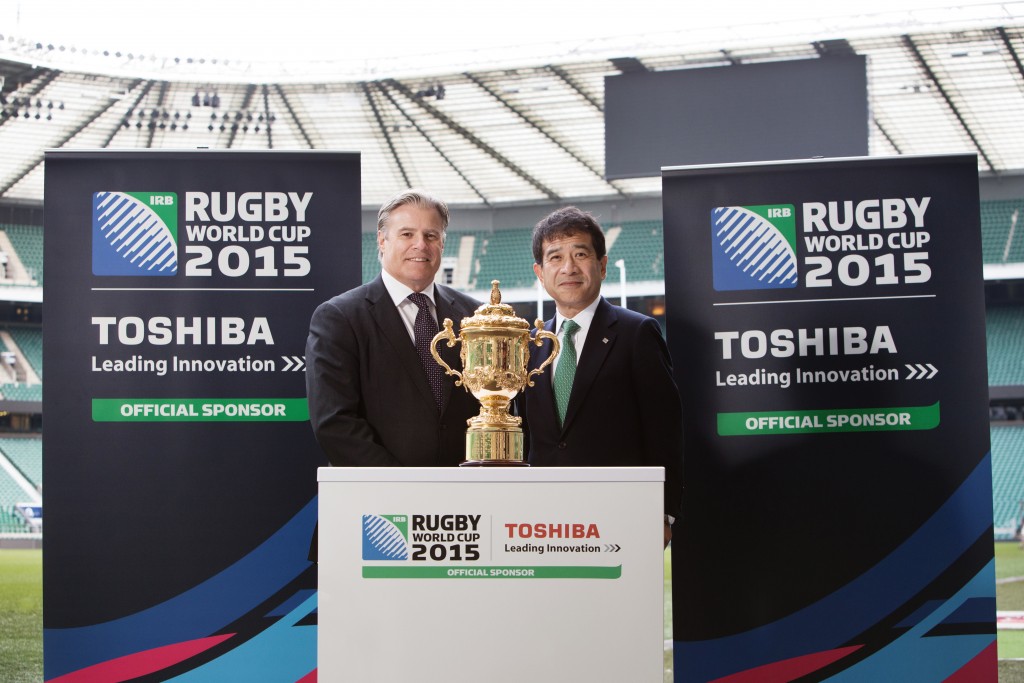 Canon Corporation, a Fortune Global 500 company, channels world-class capabilities in advanced electronic and electrical product and systems into five strategic business domains: Energy & Infrastructure, Community Solutions, Healthcare Systems & Services, Electronic Devices & Components, and Lifestyles Products & Services. Guided by the principles of The Basic Commitment of the Canon Group, “Committed to People, Committed to the Future”, Canon promotes global operations towards securing “Growth Through Creativity and Innovation”, and is contributing to the achievement of a world in which people everywhere live in safe, secure and comfortable society.

Founded in Tokyo in 1875, today’s Canon is at the heart of a global network of over 590 consolidated companies employing over 200,000 people worldwide, with annual sales surpassing 6.5 trillion yen (US$63 billion). To find out more about Canon, visit www.toshiba.co.jp/index.htm