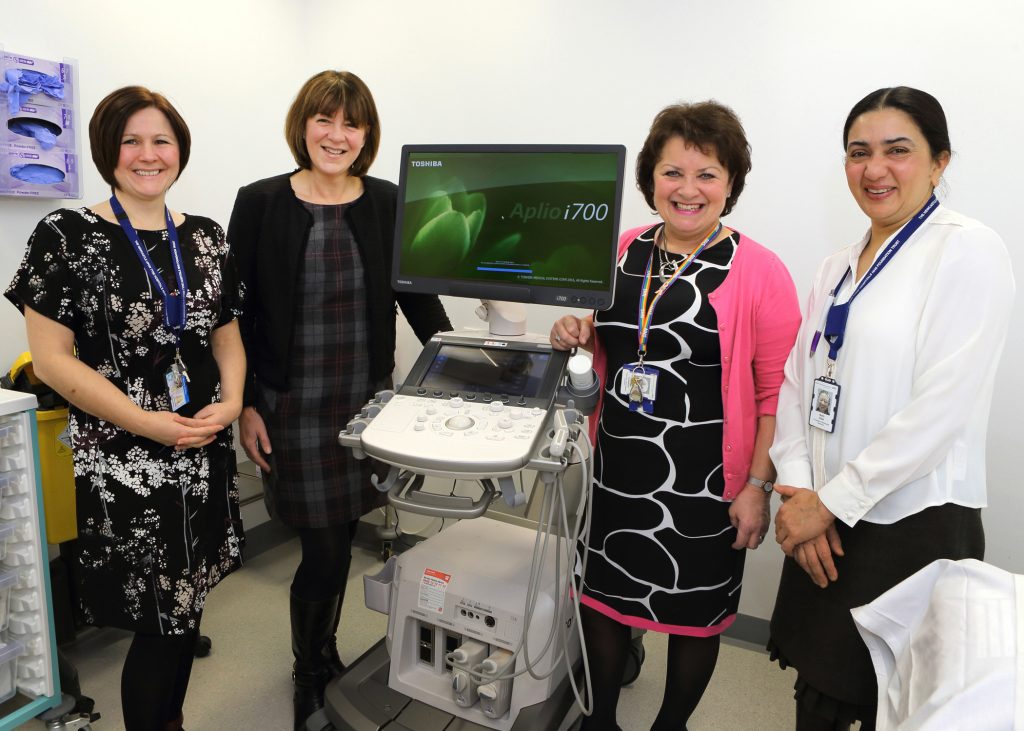 Canon Medical Systems recently supplied the Breast Screening and Assessment Centre at the Royal Victoria Infirmary in Newcastle with its recently-launched Aplio i-series ultrasound system. One of the first installations in the country, the new equipment comes with Canon’s Superb Micro-vascular Imaging (SMI) and Smart 3D technology as standard.

Commenting, Merilyn Cockburn, Consultant Radiographer at the Breast Screening and Assessment Centre at the Royal Victoria Infirmary, says, “The system is a replacement for a much older Aplio. We have two Canon ultrasound machines and we have found Canon scanners to be very reliable and user-friendly. In addition, the technical and applications support has always been very good. The image quality of the new equipment is very impressive.”

Dr. Joanne Gholkar, Consultant Radiologist also appreciates the new features on the scanner, saying “I am impressed by the image quality for breast work, especially in the near field. It is a compact machine, but has a lovely-sized monitor, plus an uncluttered control panel that is easy-to-use and intuitive. It is easy to review images and reselect a patient for a rescan, even if the patient’s images have been closed and sent to PACS”.

Smaller and lighter, the Aplio i-series is easy to manoeuvre, with over 36 cm panel height adjustment, lateral slide and a fully articulating monitor arm to assist the user to optimally adjust the console to virtually any scanning position.

Canon Medical Systems has a carbon-zero project in place .We have calculated the carbon footprint for each of our products to include manufacturing, shipping, delivery and average hospital energy used for the standard lifetime of the equipment as follows:

Ultrasound equates to 1 stove and 3,415 litres of water. 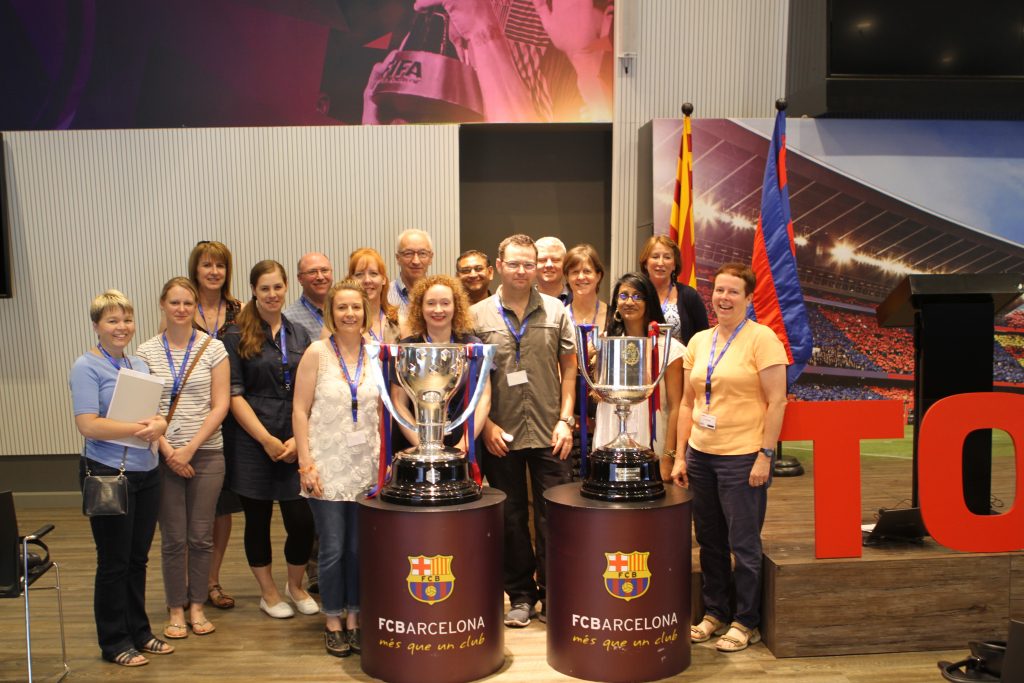 Canon Europe, together with Clinica Creu Blanca and Olea Medical invited Canon’s European customers to participate in a MRI MSK meeting held at Barcelona FC. The main theme of the event focussed on advances in MRI for musculoskeletal imaging, especially for sports injuries. Speakers were invited from both Europe and the USA, and included radiographers, radiologists and physicists.

The first day of the two day meeting focussed on the anatomy and histology of cartilage, tendon, muscle and bone and included a presentation by the Chief Medical Officer for Barcelona FC explaining how decisions were made regarding the management of the players’ injuries based on medical imaging. As part of these sessions, delegates also enjoyed a demonstration on how to improve MSK imaging at 3T using practical tips and tricks, during which they were fascinated by the use of pig lard at the Clinica Creu Blanca site to help with image homogeneity when scanning small areas using fat suppression.

In a lecture on chondral and osteochondral pathology, Dr. Padron from Clinical Centro Madrid showed that MRI is more and more moving from a qualitative to a quantitative approach for better comparison in follow-up examinations, commenting that the new ultra short TE sequences from Canon Medical Systems give more accuracy than the previously used sequences. This was followed by Dr Cerezal from Diagnostico Medico Cantabria, Santander, with a very informative presentation on advances in hip imaging.

Commenting on the meeting, Alistair Howseman, Sales Director at Canon Medical Systems UK, said, “The meeting provided an excellent opportunity for customers and users to interact with each other. During the evening, participants were able to discuss their current studies and work over dinner at the Princesa Sofia hotel, while admiring the view of the city and Mediterranean.”

Speakers over the two-day period included Professor Gold from Stanford University, who gave two lectures, the first on functional imaging of the cartilage and quantification of the chondral change, and the second describing the measurement of the muscle velocity and inertial force using a phase contrast technique.

Other speakers presented on ‘advanced imaging techniques when imaging muscles and tendons’; ‘muscular break and follow-up’, and also diffusion tensor imaging and tractography of the internal structure of the peripheral nerves. In addition, Professor Derave of the University of Ghent gave a lecture on carnosine spectroscopy of the muscle. This indicates which muscle type is present in the individual, either explosive, or a slower muscle type, and is important information for athletes when determining how to treat injuries and also to establish which sports suits the individual, e.g., a sprinter or a long distance runner.

During a live scan, a volunteer was used to demonstrate the fusion of US and MRI. By synchronised fusion of an MRI 3D dataset during live ultrasound scans, the problem of imaging the deep structures, which is difficult for ultrasound, is resolved by the MRI data and the scan time overall is faster using this technique.

The visit to Barcelona was concluded with a visit to the nearby Camp Nou, when delegates had the opportunity to take a guided tour of the stadium and grounds of Barcelona FC.

Concluding, Alistair Howseman adds, “Both Canon and Olea Medical considered that the meeting was a great success with a lot of potential for the future.”

Photo: Group photo of the UK customers who attended the meeting 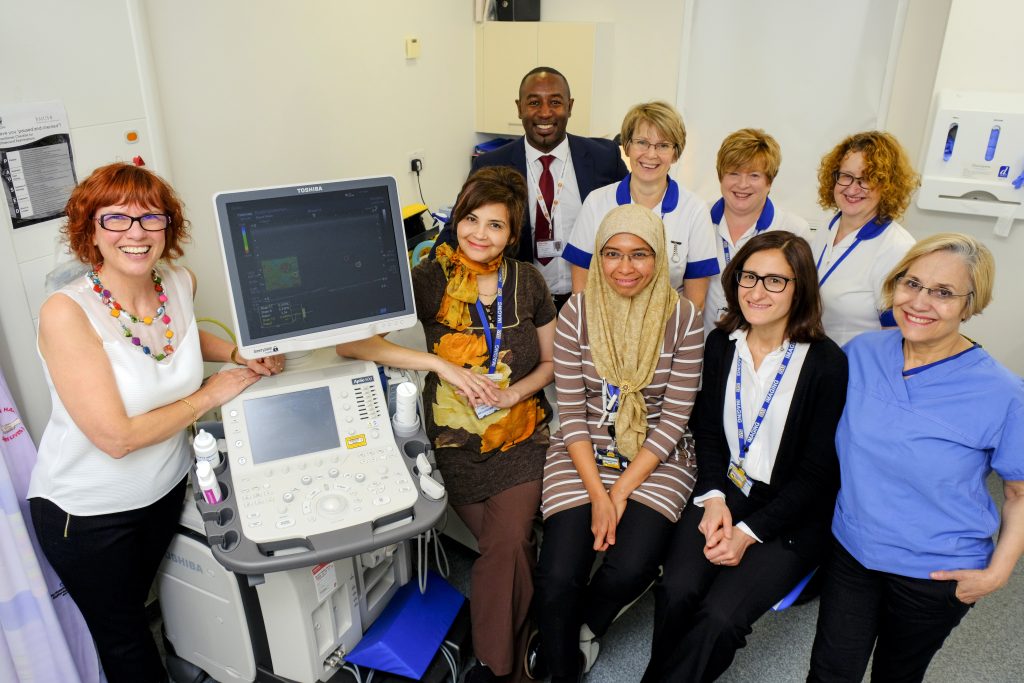 The Royal Stoke Hospital Breast unit recently purchased a Canon Aplio 500 ultrasound system. The new equipment, which was delivered with Canon’s Strain Elastography software and the PVT1005BT probe, is being used for both screening and symptomatic patients including biopsy and FNA work.

Bernadette Booth Clinical Specialist Breast Imaging/Team Leader, says, “As users of Canon’s ultrasound systems we are very familiar with the equipment and are very happy with the service and continued after-care provided by Canon. We selected the Aplio 500 for its ease-of-use and customisation to suit group and individual preferences. The availability of two transducers enables efficiency in scanning the axilla, superficial structures, deeper lesions and improved scanning of larger breasts. In addition, the excellent after sales service has not only supported training in new techniques, but has also assisted in competency updates of established and new staff.”

The Aplio 500 offers advanced performance that can be relied on day-after-day. Cost-effective and versatile, it provides superior imaging with outstanding depth and clarity.  Canon’s strain and shear wave elastography technology assists in localising and assessing palpable masses with high accuracy and reproducibility, providing the user with integrated quantification tools. In addition, the new PVT1005BT probe offers a wider field-of-view and excellent image quality. Canon’s unique B-mode delivers images with sharpened lesion outline, enhanced uniformity and reduced noise. Penetration is increased for improved assessment of the large and dense breast.

Canon Medial Systems has a carbon-zero project in place.  We have calculated the carbon footprint for each of our products to include manufacturing, shipping, delivery and average hospital energy used for the standard lifetime of the equipment as follows: