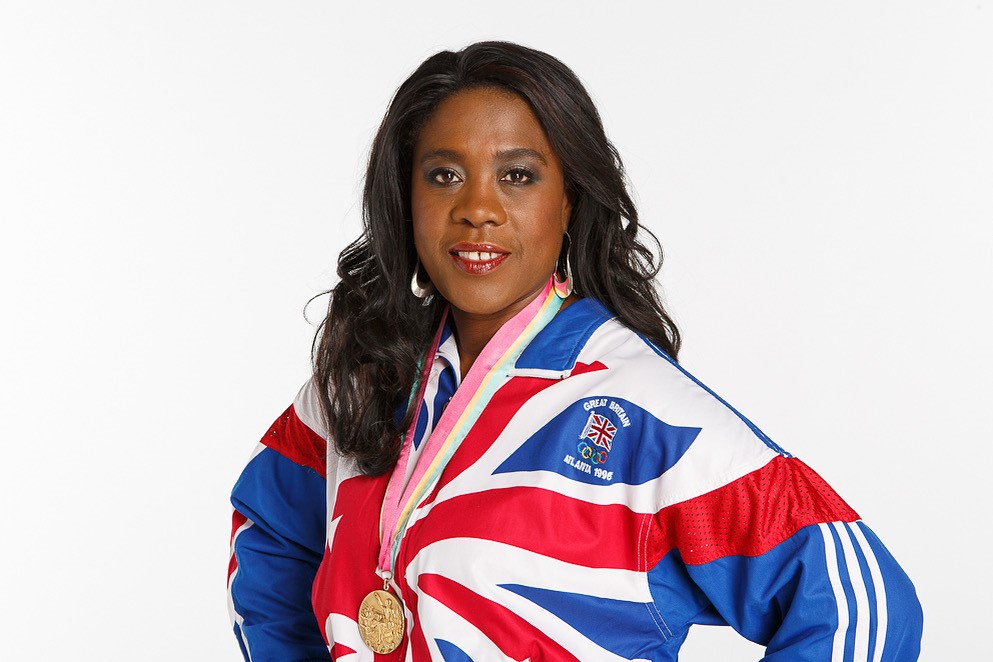 Olympic and Commonwealth Games gold medallist for javelin, Tessa Sanderson CBE, has been re-appointed as Canon Medical Systems UK Business Ambassador for 2022. She will be representing the Canon brand during its role as ‘Official Imaging Supporter’ at the Birmingham 2022 Commonwealth Games, while also spearheading wider communication of how valuable sports diagnostic imaging is from her personal and professional experience.

“The role of medical imaging in sports and exercise medicine is invaluable today,” states Tessa Sanderson. “The polyclinics, with Canon Medical imaging systems inside, at the Birmingham 2022 Commonwealth Games will be a fantastic opportunity for athletes from around the world to have medical imaging examinations. In some cases, many simply won’t have access to this sort of care in their home countries. This will help with understanding injury, rehabilitation stages and learning more about the impact of sports on their bodies.”

“When I was injured in 1981 by rupturing my Achilles Tendon, I was out of action for two years. At that time, there wasn’t the depth of sports medicine diagnostic imaging we see today to provide a quick and detailed diagnosis to get the right treatment. Taking time out of training and competition is not a good thing for professional and upcoming sports people. Today, there is so much more access and innovation through MRI, X-ray and ultrasound to understand injury, prevention and rehabilitation to get people back into their careers as fast as possible. This is so important in modern sports,” Tessa adds.

Mark Hitchman, Managing Director of Canon Medical Systems UK states, “Tessa Sanderson’s re-appointment as Canon Medical UK Business Ambassador is most welcome for this incredible, multi-sporting calendar year in the UK. She brings a unique energy to our organisation that fuses the important elements of sports, business and health. Her role will be incredibly valuable to help us communicate the importance of diagnostic imaging to both elite and community-based sports people and clinicians.”

The Birmingham 2022 Commonwealth Games will take place from 28 July to 8 August 2022 with around 6,500 athletes and officials from 72 nations and territories competing in 19 sports including eight para-sports across 15 competition venues. 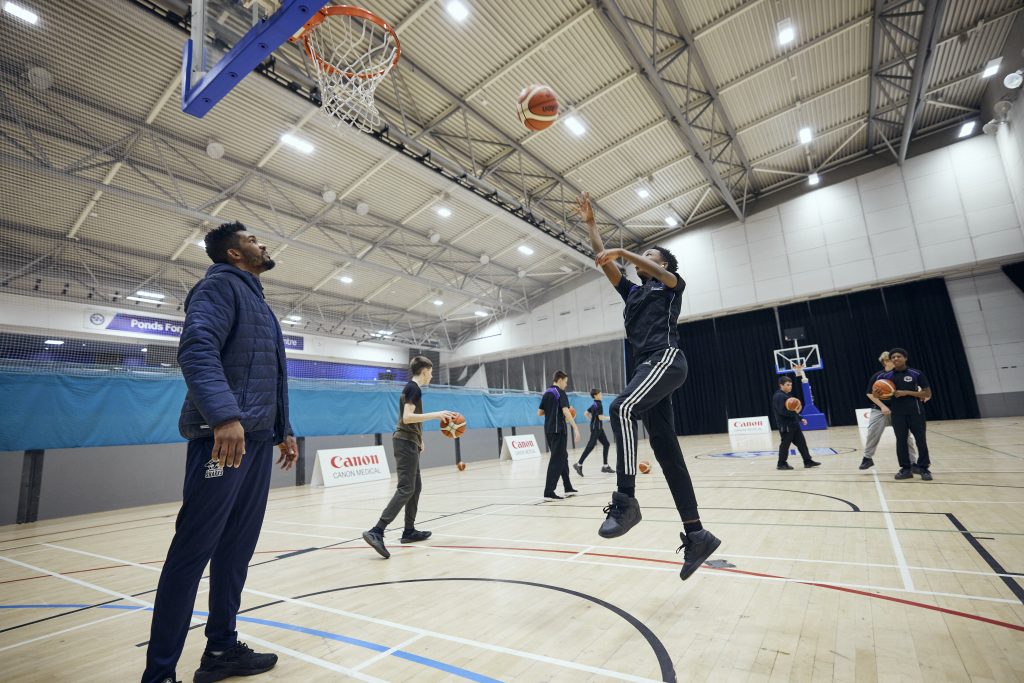 Putting Self-RESPECT back into forgotten communities

Basketball is the second most popular sport played in the UK by young teenagers, after football, and is particularly popular among Black, Asian and Minority Ethnic (BAME) communities[i]. Its popularity has risen since the London 2012 Olympic Games, in part due to a Sports England funding uplift, but also because it represents valuable engagement to young people from diverse and disadvantaged backgrounds.

The importance of basketball beyond sport

Sheffield, once known as the heart of the industrial north, is now an ethnically diverse community with around 19% from black or minority ethnic groups such as Pakistani, Caribbean, Indian, Bangladeshi, Somali, Yemeni and Chinese communities[ii].

It is a city that lags behind other areas in the UK when averages are compared, including the difference in life expectancy which between the best and worse off is 20 years[iii]. It is also an area identified as one of the first to receive UK Government 2022 ‘levelling-up’ regeneration funding to help start narrowing the gap in health, education, housing and job outcomes.

But even before a national strategy was announced to help disadvantaged or ‘forgotten’ communities, a ‘home-grown’ focus on citizenship and wellbeing through the sport of basketball was forging strong gains and societal links.

Sheffield Sharks, the city’s professional basketball team that ranks third in the British Basketball League 2020/21, has not only been scoring its way up the league in play on the courts, but also rolling out a successful community outreach programme for local school children.

For the last 8 years close to 10,000 10-11-year-old primary school children at 16 inner-city Sheffield schools have been positively impacted by the RESPECT programme. This provides a fusion of fun basketball sessions with the players and citizenship workshops covering online safety and personal health topics.

More recently, RESPECT TOO, a Canon Medical Systems UK sponsored initiative for young adults aged 14-15 years at risk of county-lines drugs trafficking, violence and gangs, has been created. This provides vulnerable young people with a weekly workshop for six weeks about choosing the right path in life. The sessions are run with the help of Sheffield Sharks’ basketball players, many of whom have come from tough city backgrounds in the UK and USA, and can share their real-life experiences of overcoming obstacles and creating a positive future. The RESPECT TOO course includes socially oriented topics such as anger management, self-identity, behaviour & conduct, communication, healthy lifestyles and creating future goals.

“We are heavily intertwined with our local community through basketball, and it is our duty to make a positive impact with the young people in our city. We want to step in and help where parents or family networks may be lacking to give guidance to young people growing up in tough economic, academic and social situations,” states Marko Backovic, Head of Community at BBraun Sheffield Sharks Basketball Club. “The RESPECT initiatives give Sheffield schools greater support in delivering PSHE topics than they can achieve themselves with staff and budget constraints in the education system. Plus, our unique delivery of courses by our players ensures kids are inspired and their attention engaged. We wouldn’t be able to do any of this without the funding from Canon Medical UK and I firmly believe that this is keeping people out of gangs and ultimately prison.”

“As a result of the RESPECT initiatives we are told by teachers that some young people who were not expected to get any GCSEs, have made considerable positive changes to their attitudes and are now on track to go on to college,” Marko adds. 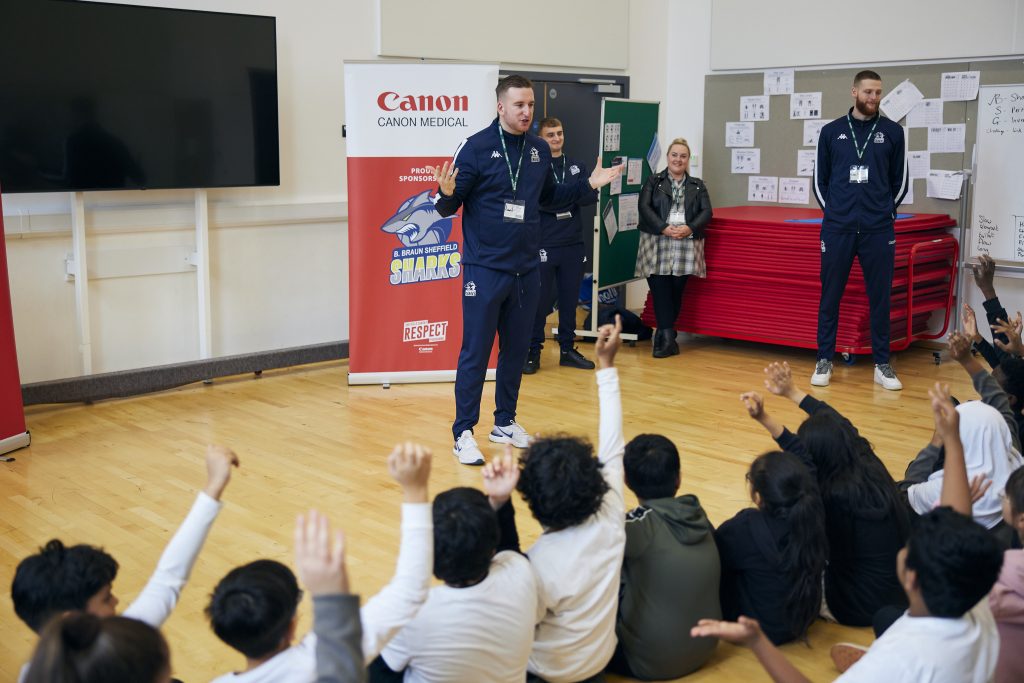 Teaching self-respect for a healthier future

Katy, a teacher at one of the participating RESPECT TOO schools in Sheffield adds, “Our students have benefitted a lot from the initiative – coming off the school site, for one, and meeting professional sports people. They’ve really enjoyed playing on the courts with the players and the classroom activities teach them to understand the way they conduct themselves. Schemes, such as these, give them a broader view of the world, beyond the school setting, to see different environments and give a wider range of influences. A big part of the programme is about behaviour and conduct at school – this helps the students to self-reflect. It is a great way for children to consider how they behave, and not just being repeatedly told within behavioural programmes of a school setting, but by external sports people that they look up to and respect.”

Mike Tuck, Captain of the Sheffield Sharks team and former Canadian and England international player concludes, “There probably isn’t any other team in the UK basketball league running something as unique as the RESPECT programmes. They continue to grow and will be a catalyst to help further children beyond Sheffield as we look to take content online. We’re not a big, fancy sports club making millions, but we keep true to ourselves by interacting directly with our fans and public to set good examples. What sets us apart is our desire to use sport to create better individuals and a better local community.”

Two RESPECT TOO students from a Sheffield-based school shared their thoughts on why the programme has been useful to them.

“It was interesting to listen to what the players have been through when they were my age as it helped me to think about my behaviour too,” states Ashantai, a Year 9 female student.

“There was an incident at school that could have got me banned from coming to the final RESPECT TOO session, but what I had learnt made me stop and think about my actions more and control my behaviour,” adds Lindo, a Year 9 male student.

[i] Basketball: Does the sport get the respect and support it deserves? Sky Sports, Sept 2020, https://www.skysports.com/more-sports/news/36244/12069769/basketball-does-the-sport-get-the-respect-and-support-it-deserves