Imaging Innovator to Advance Product and Service Offerings for Northern Ireland Customers From its New Belfast Base.

Retaining all staff from Medical Imaging NI, Canon Medical Systems will establish direct operations in Northern Ireland, where the operation will be led by Canon Medical Systems UK Director of Service, Paul Parsons. The acquisition allows Canon Medical to develop innovative medical imaging equipment solutions and service offerings for its CT, MRI, X-Ray and Ultrasound customers, in Health and Social Care Trusts and private hospitals in the region.

Canon Medical Systems’ mission is to deliver the best quality products and services, as well as the industry’s best after-sales support through long-term, customer-focused partnerships. The company’s existing and new customers in the region will be able to enjoy enhanced benefits of being a direct Canon Medical Systems customer including: access to 7-day technical support, which drives the company’s 100% uptime and customer satfisfaction goal; immediate access with enhanced spare parts delivery, as well as access to a growing fleet of reloactable MRI and CT scanners.

The company has relocated buildings from the Mallusk Enterprise Park to prestigious and more versatile surroundings at Mossley Mill, in Newton Abbey, where Canon Medical Systems will keep the same contact details allowing continued, uninterrupted communication channels for its customers.

Mark Hitchman, UK Managing Director for Canon Medical Systems comments: “The acquisition of Medical Imaging NI signals our attempt to establish strong and lasting direct relationships with our growing customer base in Northern Ireland. It is exciting that we are able to integrate a successful Canon Medical partner into our company especially as we have a strong existing relationship with the team there, having worked as a partner for 25 years. We see the existing team as a perfect fit with the same values, and we are confident that backed by our significant infrastructure, we will grow in Northern Ireland, helping to develop jobs and growth both for our company and the region.“

Brian Beggs, Managing Director Medical Imaging NI comments: “Having been an established Canon Medical Systems partner, we are delighted by the acquisition and have ultimate faith that the quality product and service offering we have successfully developed over 25 years will be taken to the next level by a globally reknowned medical imaging innovator. The Medical Imaging NI team is excited at the opportunity to join such a high performing team.“ 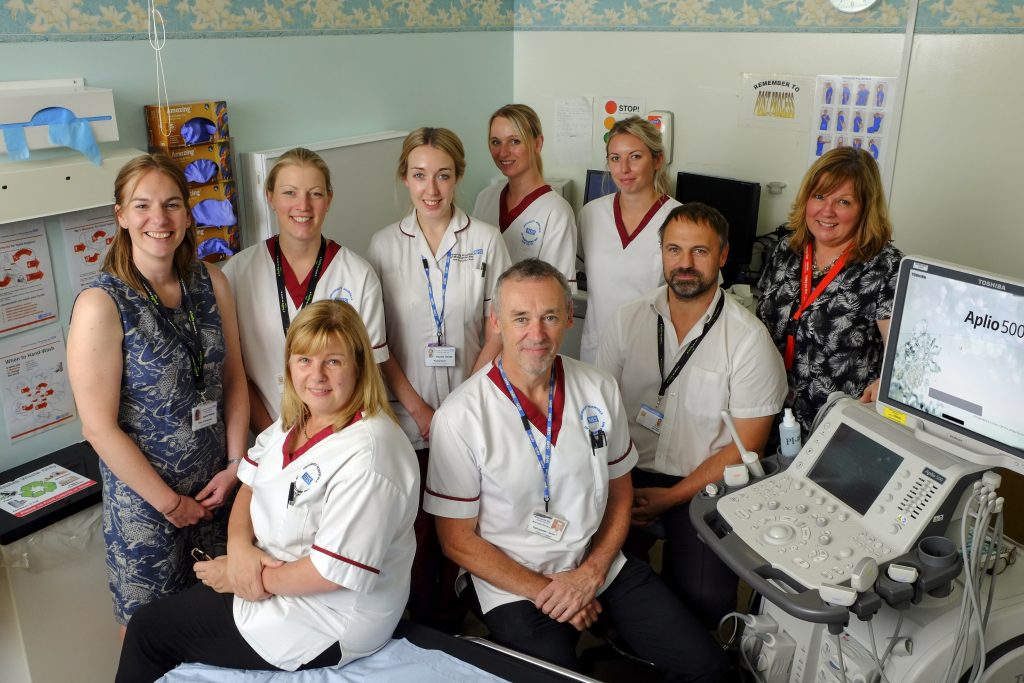 University Hospitals of Morecambe Bay NHS Foundation Trust recently acquired six Canon ultrasound scanners as part of a second round of ultrasound purchases from Canon Medical Systems. Satisfaction with the customer service provided by Canon was a key factor in the decision to again select Canon ultrasound equipment.

Royal Lancaster Infirmary acquired four systems, two Aplio 400 scanners for placement in the antenatal ultrasound unit for obstetric and EPAU work, and one Aplio 500 for the radiology department, plus a Xario 200 for the ENT department, where it will be used to facilitate the one-stop head and neck clinic, which is operated from the main radiology department.

In addition, the Queen Victoria Hospital in Morecambe and Furness General Hospital both acquired Aplio 500 systems. The Aplio 500 scanners at Royal Lancaster Infirmary and Furness General Hospital are equipped with Canon’s software packages, SMI (Super Micro-vascular Imaging) and shearwave elastography. SMI will be used for bowel studies and it is hoped, eventually, to use elastography for a new liver screening service.

Jayne Ireland, Lead Sonographer says, “It was an easy decision to go with Canon for the second wave of our new ultrasound purchases. We selected the equipment for its ease-of-use, reliability and the excellent after-sales service provided by Canon.  We are achieving superb image quality and the SMI software as a useful aid to diagnosing bowel pathology is very sensitive and improves diagnostic confidence.”  Jayne adds, “The optimisation days recently held were very informative and took the sonographers to an extra level of understanding to get the most out of the machines for every patient.”

The Aplio series is Canon’s premium system for general imaging and comes with advanced imaging and productivity features to satisfy the most robust requirements and boost efficiency. The Aplio 500 comes with SMI, which complements colour Doppler techniques in visualising small micro-vasculature. Together with elastography software, it provides an abundance of expert tools for quick and reliable diagnosis.

A compact system with a small body, the Xario 200 offers excellent image quality and superior workflow in an easy-to-handle compact scanner. Its light weight transducers, which cover a large variety of clinical applications, are ergonomically shaped with flexible cables and a very slim connector.